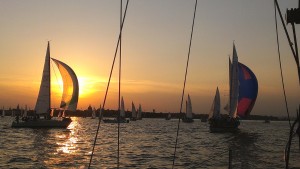 Now, why would someone, without a pet, look for a live-in housesitter, you ask?  The biggest reason is simply, homes which are occupied are less of a target for opportunistic mischief and crimes.  Additionally, as housesitters, we can collect mail and communicate if there’s a need, and generally make sure your property is cared for while your away, which is exactly what a lovely couple in Annapolis asked us to do while they vacationed for a couple of months.

We had the pleasure of discovering Annapolis and the Mid-Atlantic during this beautiful late summer stay.  We missed having any animal companionship :), but it did give us a lot of day time to explore Annapolis and the region.

Annapolis is a gem of a city — a wonderful sailing venue, a historic treasure, beautiful, lush and scenic walking and biking trails, a land of bounty from the Bay and centuries as a cultural crossroads.  During our time caring for the home, we enjoyed its proximity to a delightful, walking-scale, historic downtown and the surprising elegance of the United States Naval Academy. 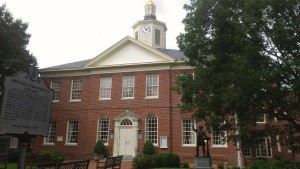 Annapolis is so much about the water — the many rivers and the Chesapeake Bay provide abundant resources and navigable transportation routes.  The Chesapeake Bay is of course famous for seafood (oysters and Maryland crab cakes in particular), which, for Midwesterners such as ourselves, is quite a treat!  The sailing culture is still very much alive and thriving in Annapolis, known as (or calling itself?) America’s Sailing Capital.  We were very privileged to have had the opportunity to participate in local events such as the summer Wednesday Night Yacht racing series (and does Jeff ever have some “blooper” stories to tell — here’s a link to some edited clips from just one race http://viewrz.com/video/race-night-bloopers-1).

The military significance of the region is such a central player in its development — from the area’s European colonization to its roles in the nation’s formative to current conflicts, this interweaving of conflict and culture is everywhere.  The historic buildings often have identity and significance because of battles, occupations and historic war figures associated with them.  The Naval Academy itself is both an educational facility for military candidates and a glorious, expansive “beaux arts” campus.  When you have the opportunity, do walk the grounds, almost the entire campus is open for visitors (although you do have to show id at the gates).

And then there are the regional attributes — a short drive to beautiful Atlantic beaches, less than an hour to DC, Virginia and historic Baltimore — what a remarkable place!  We feel so blessed to have had the opportunity to spend time in a very temperate Annapolis summer, and are happy we could provide the high quality housesitting service the vacationing homeowners were looking for!