Three’s company! (and great companionship, too)

Three beautiful little ones to enjoy, how does it get better than that! This mixed trio of two cats and a dog (the smallest of which was the dog) came to us when their wonderful parents looked for some “live-in” pet care while they vacationed. Dogsitting for this fox terrier mix and providing cat care for her two feline housemates, kept us busy, in a fun way! 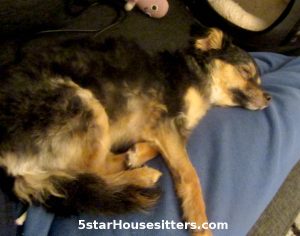 Sprocket at 11 months was all of about six pounds, and just a handful of puppy spunk and love. Although she was much smaller than either of the cats, she worked tirelessly at establishing her alpha position with them. (Not that cats care about who’s the leader — they tend to be rather libertarian and prefer everyone just go about their own lives and leave them alone 🙂 ). All the dust-ups between Sprocket and the cats needed some attention — occasionally a cat would get very annoyed and claw back, but they generally just gave her the “whatever” look cats have and moved on. 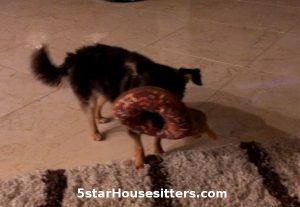 Caring for a six-pound dog can be a lot of fun because they are so transportable, you can take them with on any excursion! (Not saying we hid her in pack-along bags and took her places dogs aren’t technically allowed, but hypothetically, if we did, she’d be hard to notice!) Sprocket is an excellent traveler, up for any experience, very well-behaved for a puppy, and oh so affectionate.

And of course, as a fox terrier, chasing and retrieving “prey” is her favorite game, which can be pretty hilarious when most of her toys are almost as big as she is! Terriers, however, are tenacious, and size doesn’t matter when it comes to getting the “job” done! 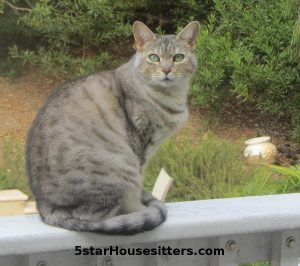 The two cats were unique personalities, too. Sedona is a beautiful silver bengal, very confident, curious and affectionate. She enjoys being brushed, and just luxuriates in the feeling of the bristles along her skin. People are very interesting for her, she often hangs around to see what’s up and pick up some loving, too. She is an indoor only cat — you do have to watch as she would LOVE to sneak outside — but she does have a second story deck she can use to enjoy the world.

The bed gets a little crowded at night — “princess” Sprocket, of course, takes the center, and Sedona has to find a nook or bent leg somewhere to get that contact she enjoys at night. Oh, and did I mention this cat likes belly rubs in the morning, too? 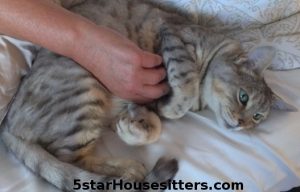 And then, there’s Marley, the “ghost.” 🙂 I’m not sure if it’s a tuxedo cat specific thing, but it seems that all the tuxedo cats we’ve watched are, well, scaredy-cats. It can take days for their curiosity to overcome their aversion to new people. Finding a hiding, black “ghost” can sometimes be a bit problematic, so we’ve learned to check with owners about favorite hiding places before they leave (Marley’s favorite was under their bed.) 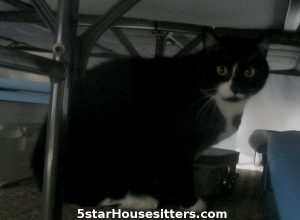 Good thing Marley enjoyed being brushed, too, or we might never have gotten to enjoy him. Banging the brush vigorously next to the bed eventually got him to poke his head out and enjoy some brushing — that is, until the little terror, Sprocket, would figure out what was going on and come in to assert her “leadership!” And then Marley would dash for cover, Sedona would come in to see what the ruckus was, Sprocket would start with her and…a wonderful, raucous time was had by all! 🙂 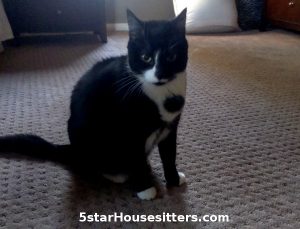 Although it was a relatively short dogsitting and cat care engagement, we thoroughly enjoyed, and absolutely fell in love with, all three. Wish we had some video of the cats, but, we do at least have a clip at the beach with Sprocket, at “work!” (Click here, or on the picture.) 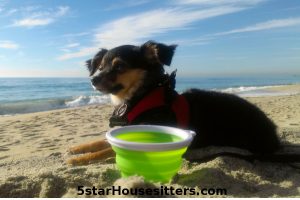