Parson Russell or Jack Russell, these are terrier-ific companions! 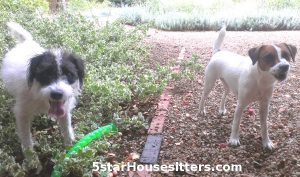 We had the pleasure of dog sitting two Parson Russell terriers in Santa Fe, and what a treat they were! (Apparently Parson Russell terriers have relatively recently been designated a breed separate from their “cousins,” Jack Russell terriers, for dog show purposes, and the Parson Russell terriers term seemed to be favored by the owners, so we’ll go with that). On top of the bonus of these two having delightful parents and a wonderful home environment near the Canyon Road area of Santa Fe, Hedy and Bing (Lamar and Crosby, of course) were a joyous riot -they play hard, play harder, then collapse lovingly into a welcoming lap at the end of a happy day. 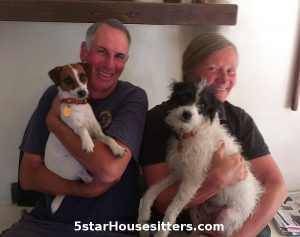 Jack Russell terriers (and their Parson Russell  cousins) are easily recognizable dog breeds, and popular, but they should come with a caution label – “I am high energy and I must play hard or I will be mischievous.” Give them plenty of exercise and stimulation and they are some of the most lovable dogs in the world. However, a bored Jack Russell (or Parson Russell) could have been what put the word “terror” in “terrier” (just kidding, of course – terrier comes from “terra,” earth, and refers to the above- or below- ground activities terriers were used for, such as flushing prey, hunting rodents,  and the like).

These dogs are incredible athletes, known for jumping ability, speed, tenaciousness and intelligence. We were so amused with their antics, we videoed Bing and Hedy on a normal days play (click here, or on Bing’s “tree hang,” for the video post) — favorite activities include tug, running at full speed, bouncing off walls (for real), and hanging from branches (Bing favors the mouth grip hang). On nice days, this brother/sister duo (yes, they really did come from the same litter) would be at the games full tilt for as long as we’d let them, out in the courtyard. The challenge was getting them in, which required an artful exploitation of Hedy’s fondness for treats and Bing’s curiosity — Hedy could be lured in with a treat, and if you left the door open enough to trick curious Bing into coming in to see what was going on, AND if you could get in position to close the door behind him before he caught sight of you, success! 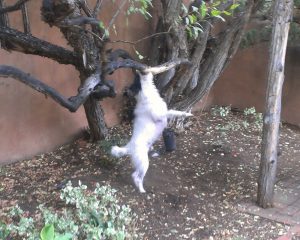 Mental exercise is also really important for all dogs, particularly those with high intelligence, and these two loved their long walks to explore new sights, sounds and smells. Both were very well-behaved on leash, except for Bing’s reactivity with other dogs — fortunately, being a little guy, it was easy enough to just pick him up and get him interested in something else before resuming the walk. As handsome and as different as they are, our walks along Canyon Road were even longer as so many people in the stream of passers-by just had to stop us to enjoy the two beautiful rascals. 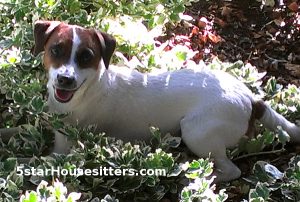 Even more memorable than their energy and antics is Bing’s and Hedy’s cuddle-ability — we so love snuggling with dogs, and these two enjoy nothing more than being physically close to their pack leaders after a full day of play. 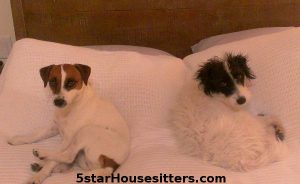 Saying goodbye till next time to our “terrier-ific” twosome leaves us longing for the next time we can get back to Santa Fe, dog sitting Parson Russell terriers!