What a bunch of bull…dogs, of course!

What an experience, dog sitting for two bulldogs in Santa Fe! Bullitt is a 35 lb French bulldog, and Tank is a 70 lb English bulldog. Both were very lovable, and had their unique quirks, making this adventure in Santa Fe, memorable! 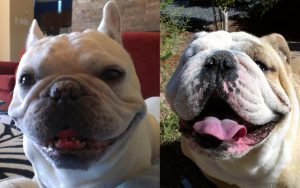 I know there are many schools of thought about when, and even if, male dogs should be neutered. In this experience, having two mature, competitive, “intact” bulldogs seemed a less than ideal situation for both, to us. I’ll just say the interactions between the two would likely have been more pleasant if there were less testosterone, or more outlets for a healthy release of the hormones and libido (i.e. incessant humping wasn’t the worst of it). 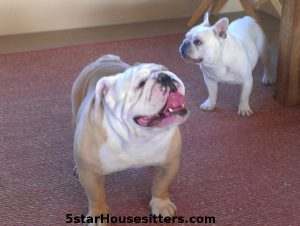 That being said, the two were really good with people, particularly one on one, and very loving in their own way. Tank, the big English bulldog, loved having his haunches scratched and really appreciated attention and affection. Whether it’s a trait of bulldogs or just an individual issue, Tank had almost an obsession about shiny objects — silver drawer pulls, “tinkerbells” created by sunlight through glass windows, the silver dryer door — all had this fascination for him which made him want to mouth and pull them vigorously. It’s a tough match trying to get a 70 lab bulldog off a drawer pull and get him distracted, but we did learn a bulldog secret. As it turns out, bulldogs really don’t have much in the way of teeth! When your hand happens to get between a bulldog’s mouth and the object of his obsession, your major downside is an unpleasant encounter with gooey, slobbery gums and mostly stubby teeth. Tank was also very territorial, we think — leaving the house was a little traumatic for him, even for a walk, but once we got him past the driveway (a struggle, one day Jeff even had to resort to carrying him) he enjoyed himself immensely. 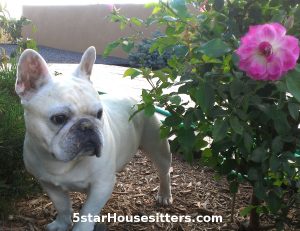 Bullitt is also a real character, on the large size for a French bulldog at 35 lbs, and very confident and intelligent — maybe even a little domineering and possessive particularly in interacting with Tank. He, of course, slept on the bed as the pack leader (at least in his mind he was), and was very competitive with Tank about attention, particularly attention from females. One on one, Bullitt is a wonderful companion, very athletic (loves his walks), adventurous and engaging.

We treasure every opportunity we have to love and learn in our dog sitting enterprises. Tank and Bullitt are beautiful boys, and experiencing the two breeds (particularly “intact” individuals) gave us some really unique insights, for which we are grateful!