Andy and his little friend, Bear! 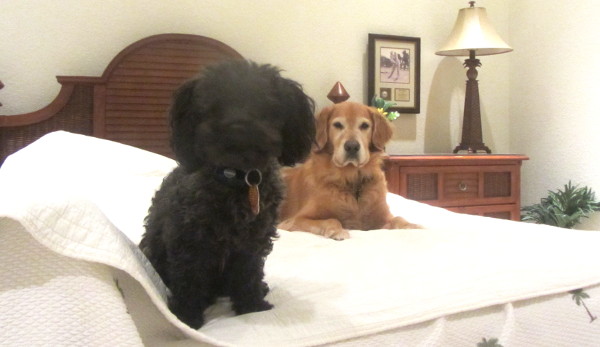 We met Andy, the 70 pound golden retriever, and his little friend, Bear, the 8 pound malti-poo in southwest Florida for a long weekend while their parents went away to play, and we were very happy their parents chose pet sitting as a dog kennel alternative for these two!

As it turns out, little 8 pound Bear wasn’t expressly named with irony in mind, he was just as cute and cuddly (and no bigger than) a dear little teddy bear.  And beneath all that curly hair is a very territorial and courageous little heart.  The owners trained him to an invisible fence and then just removed the fence, so true to his training, Bear’s fierce defense of his home front stopped exactly at the end of the driveway. 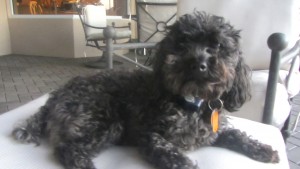 Just imagine this 8 pound ball of fur, furiously racing down the pavement then pulling up as if a brick wall was an inch from his nose — well, that’s just gotta strike terror into any would-be wrong-doer’s heart, right? 🙂 As amusing and cute as it might have been for us, Bear took his “work” very seriously; watching him walk back with an obvious sense of satisfaction of a job well done was precious.

Now Andy…Andy is a very big, very handsome boy, with just the opposite temperament to Bear’s. For all his size, Andy was…well, let’s say timid, too timid to even go for a walk in the neighborhood! Usually the challenge in caring for a large athletic breed is meeting their exercise needs, but, for gentle Andy, cuddling and general hanging with the peeps kept him content. 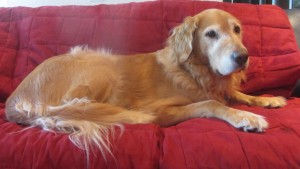 Any number of dogs might have a better experience with in home pet sitting than with an extended stay at a kennel, and some, like Andy, just aren’t a good candidate at all. Fortunately, their parents went looking for a dog boarding alternative, and everyone was all the happier for the experience!