Dog sitting Amstel– the Mighty in the Mini! :) 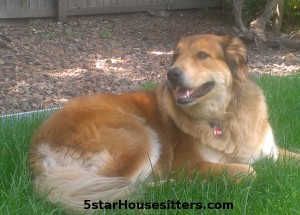 Ever have the experience of committing to something, then showing up and feeling “what have I gotten myself into?” Meeting Amstel, a 100 lb cross between a pyrenees-mastiff and an Australian cattle dog, was like that for us, but, fortunately, the story has a happy turn!

When we talked to his owner about long term house sitting and dog sitting Amstel for a month, he upfront told us Amstel was very protective, but a sweetheart once you knew him, so, he thought it best that we come in a couple nights early to get acquainted with him..

…and, my, was that first night a challenge! When you meet Amstel outside the house, even in the front yard, he’s a friendly, beautiful, calm boy who loves being petted. However, once you cross the threshold into “his” domain, you’re now a threat. Although he doesn’t have a history of biting, the snarling and nipping to herd you away is, unsettling, to say the least. As we headed to bed that night, both of us were thinking he’s never going to accept us and we’re just not going to be able to make this long term house sitting arrangement work. The next morning when we woke up, there was Amstel, 100 pounds of menace (it seemed to us) guarding his owner’s bedroom door — we felt the only safe option was just to stay in the room until his owner was up and around. 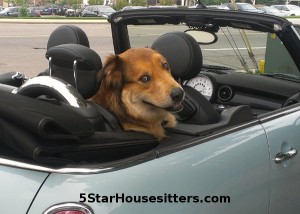 And now the story gets better, for us! As we spent more time with Amstel that day — accompanying him on his hour long walk in the park, being there for his morning piece of toast, getting him breakfast and dinner — we saw the beautiful, regal, playful boy he is to those in his “circle of trust.” By the next day, when the owner left, he had fully adopted us, and it just kept getting better from there!

Amstel is, of course, stunningly handsome, but he is a big boy who has to be careful. His daily routine starts with a trip to the park in “his” Mini Cooper convertible, top down whenever possible (the owner kindly instructed us to use the Cooper whenever we could take Amstel with us). The happiness on his face as the wind blew his fur back and offered his nose a constantly-changing menu of street and landscape smells was precious. People in other vehicles were constantly doing a double-take to see this human-sized beauty riding upright in the back — we often had people stop when we parked and come over to tell us how it made their day to see such a sight!

The hour or so we’d spend on his walk in the park was also a treat for us — clear summer mornings in Colorado are glorious, with crystalline blue skies, just a hint of cool in the air, and, in this park, shimmering sunlight on the large pond. Back at home was time for Amstel’s toast, a particularly heart warming ritual. This big boy was such a gentle giant with those in his “circle,” watching him rise on his hind legs and ever so gently take the piece of toast being offered was a special bonding ritual we loved. 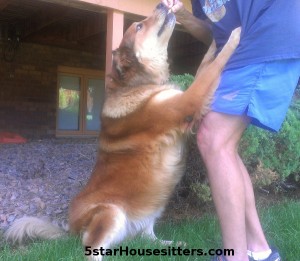 Besides going for car rides in “his” convertible whenever possible, Amstel’s other fun times included playing keep away with his ball (his excited breathing as he held the ball in his mouth made him sound like a raging animal, which took some getting used to), and occasionally playing with his best bud, Toosa, a small golden retriever owned by the owner’s daughter (who was always around to help out when needed). On his least favorite list of things is firecrackers (and of course we were there 4th of July season), people coming to the house (I thought we going right through the window) and ambulance sirens (although it’s hard to say whether the sirens bothered him or intrigued him — here’s a video of him howling with sirens, would be interesting to know Why do dogs sing?).

The month housesitting and dog sitting with Amstel flew by, but, he will always be one of our very special “little” friends, and we hope we have the opportunity to see him again, soon!